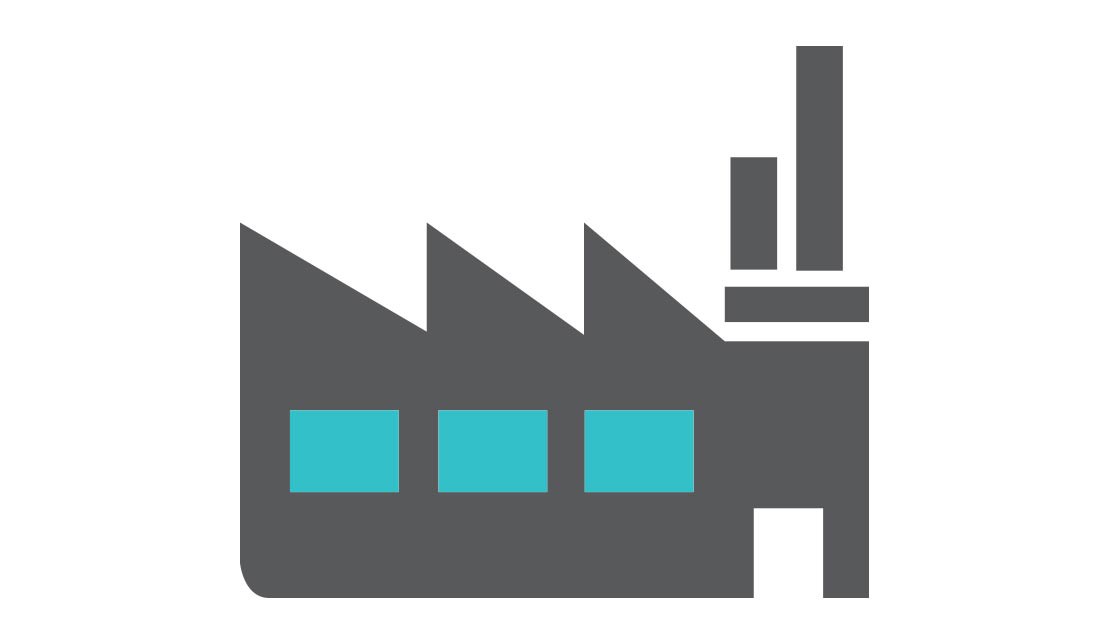 As global warming, carbon pollution reduction schemes & Copenhagen dominate the news this week, I have synthesised all the critical facts necessary for an intelligent debate on the subject into a simple read. Please email me your comments!

Is climate change a reality? Is climate change exacerbated by carbon emissions? Will the earth warm more than 20 before the turn of the century? Will such a warming have a disastrous impact upon the earth and low/lying countries in particular? No-one knows for certain the answers to these questions.

The Intergovernmental Panel on Climate Change (IPCC) 2007 reported the following:

An ANU poll conducted in Sept, 2008 with n=1000 respondents 18+ across Australia found the following:

Are consumers really willing to pay to protect the environment?

The 2008 ANU poll showed softening attitudes towards protecting the environment amongst respondents as the cost seemed to increase, i.e. ‘Very/Fairly willing’ …

Although this survey and others indicate broad support tor action on climate change, recent results indicate a softening of attitude 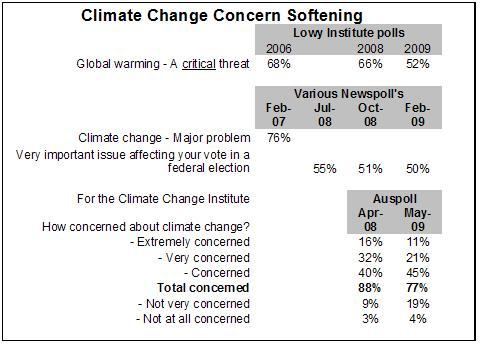 So in Australia, a number of different polls have shown declining support for global warming. It appears that only a small majority believe climate change is a critical development demanding immediate action. Nevertheless a Newspoll conducted in Sept, 2009 Found 67% in favour of the introduction of a carbon pollution reduction scheme (down from 72% in favour a year earlier, but again the results are suspect because no cost impact was included)

What’s more even some scientists disagree. Ralph Alexander, an Australian-born US scientist with a PhD in Physics from Oxford has written a book called Global Warming – False Alarm which purports to unpick the science behind the assertions that man-made CO2 causes global warming. However it appears that many more scientists support the Intergovernmental Panel of Climate Change findings that it is 90% likelihood that Global Warming is due mainly to man-made CO2

Well, even medical specialists disagree. If 4 out of 5 specialists were to tell me I had a 90% chance of getting cancer I would take remedial action. So let’s assume CO2 reduction is a worthwhile insurance action, then the question remains how best to do this? Is Rudd’s Emission Trading Scheme (ETS) the best answer or perhaps a carbon tax or a combination of both or as Abbott keeps saying, some other method that is not ‘a great big new tax?

First the Government will set a limit (or cap) on the total amount of carbon dioxide that can be emitted in a particular year and then they will gradually lower the limit each year thereafter. The top 1000 emitting companies in Australia will have to report and buy carbon emission permits. Initially many companies will be given permits (often depending how well they have lobbied) but sooner or later they will have to pay for these permits and the greater the emissions the more they will have to pay the government. Now if a company finds a way to reduce their emissions they will be able to sell their unused permits at the prevailing market price, currently estimated at between $26 and $35 a tonne of CO2. But if a company cannot reduce its emissions and there is an increasing demand for their goods, then prices will rise to pay for the carbon permits. This in turn should encourage consumers of these products (particularly energy intensive products such as petrol and electricity produced by coal generated power stations), to find ways to be more economical in their use of them. Motorists will be encouraged to use more public transport, switch to more fuel efficient cars. Householders will be encouraged to use less electricity by switching to more energy-efficient models, adjusting thermostats on heating and cooling systems and installing installation.

What are Rudd, Wong and now Abbott committing us to in CO2 reduction?

Note that the bench mark year Australia desires is 2000, but 1990 is not much different. 1995 is not in Australia’s interests

The above chart clearly shows the following:

Early indications from Copenhagen look like Australia will commit to at least the 15%
Under this target Australia will begin to reduce CO2 emissions below the year 2000 level from about year 2015. Keep in mind that electricity production generates almost half of the Total Australia CO2 emissions.

So much for the theory but let’s explore Rudd & Turnbull’s ETS a little more deeply!

Once the scheme has been working for awhile the Government will receive a huge new source of revenue – an energy tax windfall from the major businesses of as much as $20 billion per year. If the companies find they cannot pass this cost on to consumers they will have less money to invest in new carbon reduction plants.

Is the Emissions Trading Scheme (ETS) a ‘great big new tax’ in disguise?

Robert Gottliebsen writing in the Business Spectator on 1st December, 2009 has an interesting commentary on Rudd’s planned ETS with the main points as follows:

Will an ETS actually work to reduce carbon emissions?

Ross Gittins (a highly respected Economics commentator) in various articles argues that supply and demand economics (imposed by the ETS legislation) will force a change to consumers and producers habits, such that carbon emissions will be reduced. On the other hand, Gottliebsen in various articles in the Business Spectator during Nov/Dec, 2009 makes the following points:

However, Rudd’s plan appears to have backfired. Rudd was so successful in destroying Turnbull that Abbott has emerged as the new leader of the Liberal Party with a new aggressive shadow ministry line-up dedicated to expose both the flaws in the EMT scheme and in Rudd’s confused messages to-date. Rudd will now be forced to come clean on the fact that the ETS is in reality ‘a great big new tax’ on basically only half the population. Perhaps more importantly Rudd will have to clearly show how the ETS will be successful in reducing carbon emissions at the least possible cost to the Australian tax-payer. This will be an almost impossible task, if for no other reason than it is complex economics far beyond the attention span of most Australians

If most of the world’s larger CO2 emitters agree that CO2 reduction is worthwhile then the following needs to be agreed by perhaps all countries emitting 95% + of the world’s carbon emissions:

Robert Gottliebsen in his column in the Business Spectator dated 10 December, 2009 suggests a good start would be to replace the two worst polluting brown coal burning power stations, Yallourn & Hazelwood with gas fired turbines at an investment cost of around $5 billion. This alone would cut Australia’s emissions by 26 million tonnes or almost 14% of the 2020 abatement level required based on a 15% emissions reduction target. If we could do the same for the other two brown coal generators at a further $5 billion + the cost of a gas pipeline from Queensland, we would now have cut emissions by a total of 56 million tonnes or 29% of the 2020 abatement level required.  More importantly, if the generators could be brought on-line by 2015, the CO2 reduction would be 125% of the abatement scheduled for that year, so no permits would be necessary and the Rudd’s ETS could be delayed until at least 2016. This would seem to be a far better option than the government propping up the existing brown coal generators by guaranteeing their debt and selling permits to cover each tonne of CO2 emissions. The only negative would be that with no price on carbon, Australia would fall behind other countries in new energy saving and generating technology!

Australia is the only G20 country with no nuclear generation capacity. Many of these countries will continue to build more such plants and Australia will have lost its coal based cheap energy competitive advantage. Some believe that carbon sequestration (the storing of carbon deep within rock fissures) will eventually enable clean burning coal, but this technology is untested on a large scale and may never materialise

Whichever Carbon Pollution Reduction Scheme is chosen it will not be without cost! Abbott knows this; he is simply applying the heat to Rudd and enjoying his squirming!
In the meantime, it is important for Australians (and the world) to be more informed of the science arguments in favour of global warming activism. If the science is judged to be less than say 2/3rds certain, then any drastic cost imposition solution should be delayed until the science is more proven. On the other hand if the probability of man made warming and its consequences are (say) greater than 2/3rds certain, we need to be taking reversionary steps now!

Perhaps we need a world wide conference to get together all the important & qualified) proponents and sceptics to thrash out their differences and hopefully narrow their differences. The moderator in such a group would need to have the scientific capability of Albert Einstein and Sir Isaac Newton combined plus the patience of Job and the Wisdom of Solomon. Perhaps Rudd will apply for the job!

If you are looking for an internet researcher to distil a large complex subject into an easily understandable, clear concise summary …